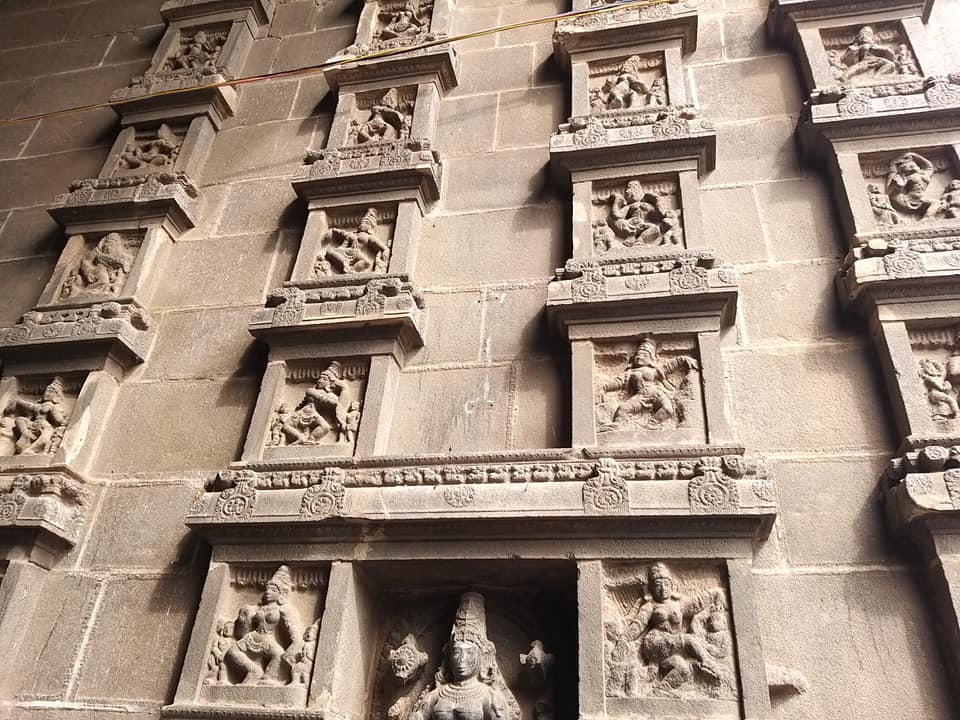 Finally, six of us flew into Bengaluru city. The first pit-stop began with Bengaluru aadheenam, also known as Adi-Kailash – my Guru’s headquarter in India. It had been two years since I last visited this monastery. I really missed all the deities and sacred Banyan tree. I wasn’t sure if I would be able to get into the place due to restricted access. But my deep yearning to have their darshan (divine sight) of the deities made my wish come true. The moment we arrived at the gate, I ran to Lord Kalabhairava and offered Him the lemon garland. Next, we were received with great warm hospitality by the sannyasis (the Hindu monks) at the reception area. They brought us to the Golden temple, as my eyes met the main deities – Nithyanandeswara (Paramashiva) and Nithyanandeshwari (Parashakti), I felt an immense bubbling joy within me. Before I spoke to them in my inner space and I heard a little voice saying “You will be back soon”. The most delightful surprise was we managed to enter into the energy field of the thousand-year-old Banyan tree and offered my respect to Lord Dakshinamoorthy, the Adi-Guru who resides in the eternal silence. I went to hug the sacred tree and offered respect to the sage Patanjali. One thing I realized – it is the powerful space of integrity to Guru that gets a ‘Tathaastu’ (blessings) from the Divine. After a delicious organic sattvic lunch, we spent a great time catching up with the friendly Adi-kailashavasis (people who live in Adi-Kailash). The gigantic 21-feet Ananda Linga at Vaidya Sarovar was another place we didn’t want to miss and got its darshan. Before we left, at the gate, we received the blessings and prasada (divine food) from Lord Kalabhairava – the sandalwood paste for our puja. What a lovely afternoon!

The next day after breakfast, we set off to Tiruvannamalai – Swamiji’s birthplace. The journey took about 5 hours. Immediately, after checking in, I took a quick bath and ran towards Arunachaleshwara temple – the Moola linga (source linga) representing the fire element. In fact, I was given a vision a week ago to offer Guru puja to Swamiji’s Guru, Arunagiri Yogishwara at a shrine in the temple.

Like three kids on adventure, we entered the temple gate with excitement and anticipation. The moment we looked up the sky – there He is – Arunachala Hill (the embodiment of Paramashiva) looking so majestic! As the temple was so crowded in the evening due to the festive period, we just went straight to the shrine of Arunagiri Yogishwara at the back of the main temple. We wasted no time and began setting up our Guru puja kit in front of the mandapam (4 pillared shrine) among the curious eyes of the local Indians. From my third eye, I had a vision of Swamiji sitting on the 4 pillared mandapam in a relaxed smile. Suddenly I realized I forgot to bring the flowers and bilva leaves which I kept in my luggage. In desperation, I went around asking the locals if they could spare us some fresh flowers and they told me I needed to go outside to buy. One lady told us to use the one flower there, we shared the petals and started offering Guru puja. The local adults and kids soon gathered with curiosity and listening to a Chinese foreigner chanting the Sanskrit mantras of Guru Puja. Half way through the puja, one Indian lady came back with a bagful of fresh flowers and gave it to us. What a miracle! I suddenly felt that my Guru was listening to my ardent cry for help! My heart felt so blissful and complete after offering the puja. I was later told that the temple priests do not allow visitors to offer puja at the premise, but somehow, I got away with it! Disciples of Paramashiva do have certain privileges!

The next day we attended morning satsang at Tiruvannamalai aadheenam and proceeded visit the Jeeva samadhi (attainment of oneness with Source) of Swamiji’s Gurus – Issaki Swamigal, Ragupathi Yogi and Kupammal. We could sense the Gurus of Swamiji were very delighted to have us visited them. Next, we were searching for Pavala Kundru, the very rock where Swamiji had his first enlightenment experience at the age of twelve. It took us a while to find the sacred rock as the driver dropped us at the different entrance. Somehow, my intuition guided me to walk to a small gate at the back of a temple and after walking down a few steps, we finally found the rock with a trishul (trident). I must confess that rock truly radiates certain extraordinary energy. We could feel ourselves getting elevated to certain space of lightness, even my son had a mystical experience just by connecting with the rock.

Another beautiful happening that took place in Tiruvannamalai was offering Pratyaksha pada puja (a ritual offering gratitude to Guru) to Swamiji on His 43rd Avatar Jayanthi (birthday). We felt so grateful for all the happenings by Guru’s grace. Honestly, for the first time, we managed to really experience Tiruvannamalai at a leisurely pace – this small mystical temple village has started to grow in my heart.

Next, we headed to Pondicherry and the first sweet experience was visiting a lovely Lord Ganapathi temple. This Ganapathi temple exuded such incredible energy and I simply loved its intricate wall carvings of MahaGanapathi being worshipped in various expressions. All of us could sense Lord Ganapathi was dancing in celebration of our visit. As Lord Ganapathi is known as the Lord of completion, I got His blessings to help kids complete with all ideas of impossibility and connect with Him as their first deity – a project which I am working on with my team.

Another highlight at Pondicherry was the day-trip to Chidambaram temple which is still privately managed by a family. Chidambaram is famous for Lord Nataraja (moola Nataraja – Source Nataraja). The entire temple featured various exquisite stone carvings of Lord Nataraja in 108 karanas (dance poses) as well as beautiful paintings of dancing Shiva on the ceilings. This is one of my favourite temples as I really felt so blissful and thoughtless in the space of Cosmic Dancer. In fact, the energy made me want to perform Shiva Tandava (Shiva’s cosmic dance). It was in this space that I discovered my past connection with Him as His dancer – a clue to uncover my bio memory of a divine dancer.

At Tanjore (also known as Tanjavur), we didn’t spend much time at the temple as it was a short two-day visit. Another divine blessing, I received was to have the jasmine garland offered to Shiva Linga actually fell in front of me as I was snapping photos of the wall carvings depicting worship of Shiva lingas. I brought back the divine energy of the jasmine garland in a deity’s jewellery.

Another adventure was visiting Tanjavur Art Village where we learned the art and craft of making deity moorthy (statue) and the original gold painting. This shop we visited was a family business and the art and craft were handed down to grandchildren. We were thrilled to find so many exquisitely carved deity moorthies with extraordinary details and energy. My son actually found a 40-yrs-old Lord Ganapathi deity which talked to him in his inner space. I reckoned that the intense powerful visualization of the master crafter of this deity must have been in oneness (advaita) with Lord Ganapathi when he was creating this deity as that feeling connection gave life to the deity! This is the science of sacred art of deities making.

The last pit-stop was Madurai where my son and I had past life connection with the Goddess, Devi Meenakshi. The experience I had in Meenakshi temple was not very pleasant as one could feel the hostility of the temple administrators and security officers. We had to queue for two hours before we could have a two-second darshan of the Goddess. Frankly, I wished I could spend more time in this temple but the thought of battling the crowd and unfriendly officers just killed my interest. So, instead we spent more time at the Madurai Aadheenam listening to sacred truths in the morning discourse (satsang) and receiving Swamiji’s daily initiation.  Madurai is an excellent place for sarees, temple materials and gemstones.

This two-week temple tour to various energy fields did miraculous shift in my consciousness. Not only I could feel a deeper connection with different energy of deities, I also felt whatever I meant to receive from December spiritual retreat, I already received it on this trip and I felt so complete. I can feel the divine grace of my Guru in every happening during the entire journey, he was with us all the time. To me, he had made my Paramashivoham exceptionally special! Namaste 😀