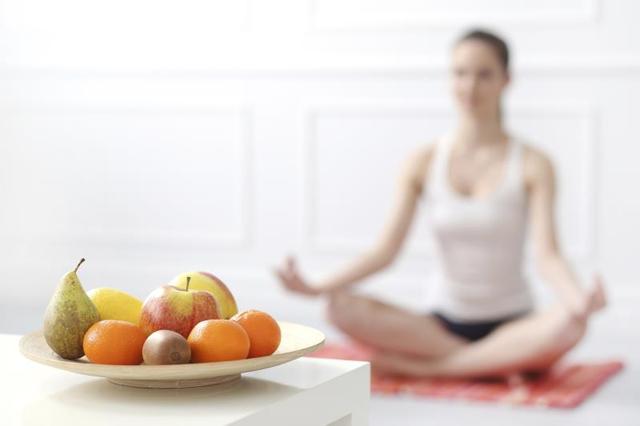 Do you know that a Yogi goes through a major diet change once he or she becomes firmly established on the path of Yoga?

As a living Yogi, I remembered the first shift in my diet happened when I decided to become a vegetarian in January 2007 after taking the initiation as a Nithya Spiritual Healer from my Guru, Paramahamsa Nithyananda (fondly known as Swamiji). My better half was struggling with my decision because he said that many Yoga teachers (referring to my fellow yoga teacher friends) were not vegetarian, why the need to make such a drastic decision. See, the enjoyment of food is one major sense pleasure for him, not able to enjoy food with his wife was too much for him. The purification nature of Yoga just made this decision a natural evolution for me by the grace of Swamiji. Swamiji cautioned us that anything you eat, that becomes you! One part of what you eat becomes your bones, muscles, flesh, blood, words, thinking, feeling and your Being! Food plays a vital role in our life, not just the body-mind, but also in our consciousness.

In mid-2012, I was inspired by the ability to go beyond solid food. I took up the next big transformation when I began the 21-day process called Nirahara Samyama, a Yogic technology which trains our bio-memory to produce the energy directly from the space and liberating us from all the patterns we created about food and itself. This extraordinary process not only allowed me to go beyond the need for solid food, it also broke my root pattern of food. After 21-days, I felt so good, healthy and light that that I decided to live as a Nirahari, meaning living on liquid diet as a lifestyle after being initiated by Swamiji into the 4th level of the Nirahara Samyama. Essentially, for 2 years from 2013-2014, I was living mainly on liquid diet, only having 1 or 2 meals per week just to maintain the body. This Yogic process awakened the bio-memory of plant in me and I was able to produce energy and food just with ether. One amazing state was my body constantly felt so energetic, very light and high on prana which was the pure fuel that sustained the body. The muscle memory of tiredness and boredom completely left my system. After 2014 Nithyanandoham spiritual retreat, Swamiji said that I could stop living as a Nirahari and allow the body intelligence to function. Now, I eat moderately – 1 meal a day and most of the time I am on the liquid diet as the body prefers the liquid diet anyway. From this transformational process, Swamiji made me realise that the true power of living without food is available to all of us. Through Nirahara Samyama, I gain confidence and the freedom when it comes to food, it is no longer a bondage!

One thing I noticed that there are many yoga practitioners out there who haven’t made a shift in their diet from non-vegetarian to vegetarian because they are not aware of the impact of vegetarian diet in Yoga. For me, it happens after having received the grace of a living enlightened Guru, the evolution was so natural with the understanding of the right context without any suppression.

During my vacation last week, I spent some time to study the ancient scriptures outlined in the Vedagamas revealed by Sadashiva – the Adi Yogi (the original Yogi). I found that for Yoga to be successful, a moderate diet must be followed by the aspirant of Yoga.

“Not for the effulgent light (alone) but for the spread of dharma (right living); the method of right diet is firmly being stated for the Yogis.” ~ Rudrayamala Tantra (23.2)

“One can do Yoga as much as one wants, but until the diet is adhered to as per Sadashiva’s instructions, it is said that one can never become a true Yogi. It is clearly said that the one in the path of Yoga but does not know the dietary discipline, cannot become a Yogi in even thousands of crores of years” ~ Rudrayamala Tantra (23.3)

Swamiji explains that “for ordinary human beings, neither eating too much nor eating nothing, neither sleeping too much nor non-sleeping, both extremes are not right. When you take vegetarian food, you also awaken your bio memory to be directly producing food and energy from space just like plants and trees. See, plants and trees carry a quality or intelligence. They produce their energy directly from the Sun and ether, from air. They directly produce life-energy (prana) from the sun, air, earth and water. When you are regularly eating only vegetarian food consciously, your bio memory and bio energy can awaken the same quality. If you can take a little support from the conscious source like meditation or a little yoga, you can see very clearly that possibility in your bio memory is awakened.”

The only and important necessity for a practicing Yogi is to be a pure vegetarian. Yogis preferably consume only sattvic food. Sattvic food are abundant in prana. It means food which is rich in prana – the universal life-force energy. The high level of prana in organic food supports spiritual practices. Vegetarian food by its nature awakens your bio-energy, bio intelligence, bio memory and keeps your muscle memory pure, keeps you healthier, more alive, more inspired, more intelligent and excited in living.

In essence, if you are really sincere on the path of Yoga, becoming vegetarian and eating moderately is a part of the spiritual awakening of your bio memory and bio energy as well as an ability to live with minimum things from planet earth. Namaste 😀