Be a Light Unto Yourself 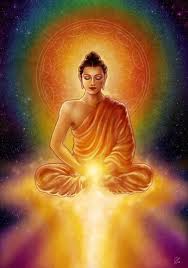 Today is Vesak Day – a very auspicious day in celebration of  the enlightenment of Gautama Buddha. In remembrance of this great being, his compassion and enormous contribution to the human consciousness, I would like to share with my readers a real-life incident which happened to Lord Buddha’s life before he left his body. This happening was taken from Osho’s book – “The Buddha said”, gifted by a dear friend from USA.

When Buddha was dying, all his disciples gathered around him to listen to his final teaching to the world.  Ananda, his chief disciple was crying and weeping. And Budhha said “Stop! What are you doing? Why are you crying and weeping?”

Buddha died and after only 24-hours, Ananda became enlightened. How could this happen? This is one of the mysteries. For 40 years he lived with Buddha, and just 24-hours after Buddha died, he became enlightened. The very death worked like a big shock and the last message “Be a light unto yourself” penetrated very deeply into his being.

When Buddha was alive, Ananda was not authentically listening, he was probably half-asleep most of the time during Buddha’s teaching, thinking he had heard it so many times again and again by Buddha. So he started feeling that he already knew.

But when Buddha was about to leave the body, Ananda must have been utterly alert. In fact, he was trembling – from the very idea of millions of years again stumbling in darkness. And Buddha told him, “Don’t be worried, your light is within you.” That struck home, perhaps that was the first time Ananda really listened. Those 40 years he must have been missing, that may have been the first time he was aware. He had clarity. The very situation was such that he was trembling to his roots, his very foundation was shaking. Buddha was leaving…and when he had lived with a man like Buddha for 40 years, and then Buddha was about to die and nothing had happened to him.  He had missed the opportunity!

Buddha’s death penetrated him like a sword, when Buddha uttered those last final words, “Be a light unto yourself” and died immediately. This was his last utterance on this earth: BE A LIGHT UNTO YOURSELF. This truth struck home and penetrated Ananda’s heart and within 24-hours he became enlightened.

You are like a lamp which is covered by many dark curtains and no light comes out of it. As you slowly remove one curtain, then another, and another curtain, slowly rays of light start radiating, not clear, but a glow. As more curtains are removed…one day when all curtains are dropped, you suddenly see that you are a lamp unto yourself.

Don’t live this life without experiencing this truth. The process of removing the curtains is the spiritual practice – Sadhana which can be anything that removes the veils of illusion we are caught in. It is an individual’s responsibility to find one’s inner light.

Remember this truth by Lord Buddha: Appa deepo bhava..you are light – Let you be a light unto yourself. Namaste 🙂