Sankalpa: Sowing the Seed of Change 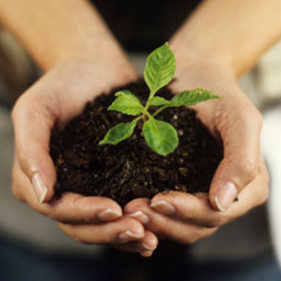 Do you know the science of setting a resolution or intention?

In the Vedic tradition, there is a powerful practice called Sankalpa, it’s like sowing the seed of change for whatever reality we want to cause. The Sanskrit word – San means altogether, Kalpa comes from Kalpana which means idea. So Sankalpa means that all my ideas and thoughts have united in only one thought, one idea, one goal, and that is defined in this undertaking. Therefore, Sankalpa is a resolution or commitment that is the most effective means of training our mind by reminding ourselves constantly of our highest possibility.

I learnt this science from Paramahamsa Nithyananda (fondly known as Swamiji), when he spoke about the lost body language of Yoga today which is very different from the original expression defined by the great sage, Patanjali, who put together the Yoga Sutras in a systematic way as the Science of bliss. Swamiji said that all the yoga books we have read today, only the verbal language of Patanjali is recorded, but not Patanjali’s body language. In most of the yoga practices we see today, yoga has been reduced to a mere physical workout or some breathing techniques as a form of a stress buster. Many do not even know the science of setting an intention before a yoga practice.

Fundamentally, we need to understand that thoughts and beliefs have a profound effect on the functioning and well-being of our body-mind. So much so that our body is shaped according to our belief system and emotional make-up. According to Raghupati Yogi, the yoga master who taught Swamiji  Yoga at the age of 3, one of the very rare yoga masters who retained the original body language of Patanjali, once told Swamiji that this mindblowing truth – “With whatever intention you move your body, bend your body or activate your body, it is that intention that purpose that will be recorded into your body; those samskaras will start expressing in your body”.  So the ways we do asanas/poses are not important, the intention is all that matters! If you have the intention to have good health and do whatever you want for that intention, move your body any which way for that intention, simply health will happen in you.

This truth would have shattered the beliefs of many hard-core yoga practitioners because they have invested so much of time on grooming their body through yoga asana. Due to the loss of the body language, the subtle science of Yoga has been reduced to the level of a body workout!

From my own experience, setting a Sankalpa or intention has become a way of life in my personal practice as well as in my classes and private sessions with clients. To me, experientially I feel that it aligns all the different energies – body intelligence, mind and consciousness to a single one-pointed awareness. This is such a powerful science once we understand how our mind works.

In the science of Yoga Nidra, Swami Satyananda Saraswati, the founder of Bihar School of Yoga, explained that setting sankkalpa is a powerful method of reshaping the personality and direction in life along positive lines. If you know what you wish to achieve in life, sankalpa can be the creator of your new future. But first, you must have a clear direction.

Many of us are floundering in the darkness, we don’t know which way we are headed because we are being led, forced and pushed by different forces in life. Using sankalpa in our yoga practices, you have a choice in life and that choice is created by the sankalpa or intention.

During the practice of Yoga Nidra, the Sankalpa takes the form of a short and positive statement which is impressed on the subconscious mind when it is receptive and sensitive to auto-suggestion. The sankalpa has to be made, not when you are intellectually active, but when your mind is calm and quiet. Before and after the practice, there is a short period dedicated to sankalpa, the resolve you make at the beginning of the practice is like sowing a seed, and the resolve at the end is like irrigating it.

Sankalpa is a determination to become something or to do something in your life. Sankalpa is a seed which you create and then sow in the bed of your mind. When the mind is clear, the Sankalpa grows into fruition. If you prepare the mind and sow the seed properly, then it will grow in your life and become a powerful directive.

Once the seed of sankalpa is planted deep in the subconscious, it gathers the vast forces of the mind in order to bring about its fruition. This deep and powerful seed will eventually manifest itself again and again at a conscious level and bring about changes in your personality and life. Each of us has the power to remould our own mental structure.

The seed of change is found in the resolve made in yoga practices, this resolution must be backed by deeply ingrained willpower in order to be carried through. Sankalpa is a powerful technique and it should be used intelligently. It should be used for a greater purpose such as achieving self-realization or the state of Samadhi. If you want to transform your life pattern or if there is a negative tendency or habit in your life and you want to correct it, both can be done by the power of the sankalpa. The purpose of sankalpa is not to fulfil desires but to create strength in the structure of the mind.  You can even say that sankalpa is the force of will. A sankalpa should only be made when one understands its real purpose and meaning.

In essence, Sankalpa can create a direction for your whole life if you use it wisely. The purpose of Sankalpa is to influence and transform the whole life pattern, not only physically but also mentally, emotionally and spiritually. It is better to choose a Sankalpa that will change your whole personality so that you become more balanced, happy and fulfilled. When Sankalpa becomes the directing force in you, everything you do in life becomes successful. Namaste 🙂