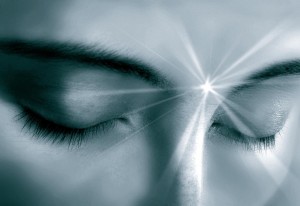 I just got back yesterday from a whirlwind trip in Varanasi, the ancient powerful energy field of many enlightened masters, to attend a 7-day Shivoham Inner Awakening program in the presence of an enlightened master, Paramahamsa Nithyananda (fondly known as Swamiji). The primary focus of this program was to awaken the third eye or Agna chakra. Varanasi literally means the space between two brows and nose i.e. the third eye!

The most exciting happening I can say is that the world just witnessed a new spiritual shift in Varanasi because a whole new realm of third eye awakening initiation done for the first time in history of humankind to a large group of people (over 600 people). The result has been phenomenal – 100% success rate for children who are now read double blindfolded and even some adults for the first time. For children, the effect of awakening is relatively faster because they have less patterns and incompletions which hinder the awakening process. For adults, it requires slightly more time for us to melt down some of patterns of the self-doubt, self hatred and self denial (SDHD).

Third Eye Awakening in Vedic tradition is a science, meaning, it is replicable in everyone not just for some people. The process given by Swamiji is taken from Shiva Agama. The word “agama” means authoritative scripture. Tantric and Saiva tradition recognizes the agamas as the most authoritative and sacred texts on the methods of worshipping Saguna Iswara or the Brahman (supreme consciousness) with qualities.  As explained by Swamiji, the science of third eye awakening works only with master’s initiation using a combination of the Shivoham “I am Shiva” process and shodasi mantras, the 16 sacred sounds. He just infuses the shodasi mantras into our bio-memory at the tip of our consciousness.

A quote by Swamiji:

“In the SHIVOHAM process, I will be doing completion inside you using powerful sounds and awakening your potential energy (the Kundalini Shakti) giving you bliss, completion, power, enlightenment and reprogramming your whole being towards enlightenment.”~ Paramahamsa Nithyananda

Each process was followed by a group practice where we sat in small groups and systematically we practice the blindfold reading using location of objects, short words and sentences and finally password codes. The practice literally forced us to look into our inner space and melt down the patterns of SDHD. A few things I learned from my own experience are:- 1) awakening our innate power requires a lot of patience; 2) we start to see the thinking patterns the mind built up over the years which box us in and prevent us from seeing things as it is; 3) power of perception or intuition is also a power of third eye and finally 4) one has to become a child again to see through the third eye as it is.

I clearly know this Vedic science works because we are seeing the power of this ancient Vedic science can heal so many aspects of our life and being. Awakening the third eye not only transforms us from Jiva (soul) to Shiva (divine) experiencing the space of god in us, this power also makes us extraordinary healers. Swamiji spoke about the possibility of scanning human bodies for diseases using the third eye such that humanity can be helped with this power. The expression of third eye power comes in many dimensions! Swamiji is continuously refining the techniques and taking us to the next level of Third Eye awakening where not only we can read whatever is in the mind of the people, or blindfold reading, but also we will also see the reality beyond what is seen as the world. We will see this world as a dream, and see the reality beyond this world. The ultimate power of the third eye is “Sarvajnathwa” which means – If you know life, you know everything!

After having gone through the awakening process, I feel that  I am reborn. I felt very blessed to be able to receive this gift in the very land of Mahadeva’s third eye – Varanasi. Next, I just need to continue with the practice and allow the bio memory to start expressing itself in my life. One thing I know for sure – life is going to be whole lot of fun playing with the different powers! Namaste. 😀