The Science behind Chakras 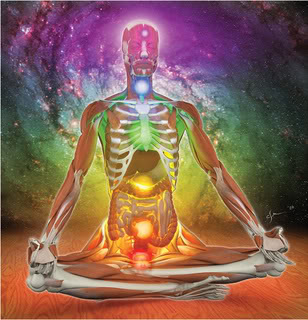 Do you know that there are seven chakras in our body?

Chakras are the whirling energy centers in our subtle body. The word ‘Chakra’ in Sanskrit literally translates as ‘wheel’ or ‘disk’. Chakras are visualized as spinning wheels or flowers with different numbers of petals. Chakras are located in our subtle body. The three main subtle energy channels of our body (nadis) are the Ida (left nadi), Pingala (right nadi) and Sushumna (central nadi) channels, which run along the spinal column. They correspond roughly to the sympathetic, parasympathetic, and central nervous systems. The nadis (energy pathways) run in a curved path, criss-crossing one another several times. At the seven points of intersection along the spine, they form strong energy hubs known as chakras.

Chakras are the subtle energy powerhouses which are responsible for spinning and drawing the universal life-force (prana) into the body. They also act as batteries to store this energy and distribute it to the surrounding areas of the body. Each chakra influences bodily functions near its region of the spine. The chakras roughly correspond to, and influence the activity of, the important glands of the body. They interact with the body’s ductless endocrine glands and lymphatic system by feeding in good bio-energies and disposing of unwanted bio-energies. They are linked to the nerve ganglia (plexuses) of the body and influence nervous functions as well. Thus, the chakras are influential at every level of our functioning and well-being. They are responsible for keeping the spiritual, mental, emotional and physical health of the body in balance.

Strictly speaking, the chakras are not present in the physical body at all. They exist on the metaphysical plane, and link together the three bodies (known as shareeras). The individual is made up of three bodies – the physical or gross body (sthula shareera), the mental or subtle body (sukshma shareera) and the causal body (kaarana shareera). These three bodies are categorized according to the states of consciousness where they come into play. Each shareera or body is associated with a particular state of consciousness.

The physical body is the body we know in the waking state, which eats, speaks, moves about and so on. This is the only body we are really familiar with. The mental body is the body that we use to think, verbalize, visualize and so on. The mental body is also the body that we use when we dream. While our body is lying fast asleep in our bed at home, in our dream we may be traveling in another country. How does this happen? At this time, we are using the mental body to travel around! In the dream state, the mental body is as real and functional as the physical body in the waking state. The causal body is the body we use when we are in deep restful dreamless sleep. It is made up of pure tamas (inertness). During our sleep cycle, there are phases when the mind becomes dormant and thoughtless. This is the time when we experience the causal body. These three bodies are not separate as we may think, they are tightly coupled.

Whatever you see in outer world is a combination of matter and energy. The world universe is seen as ksetra and ksetrajna, maya and atman, prakriti and purusha, matter and energy, body-mind and consciousness. Existence as we see it cannot be with only one of them. If we believe that what we are is simply matter, we are in illusion or maya.

Ksetra is the body that we associate ourselves with, and ksetrajnya is the consciousness. What we see as a human body is a combination of both. If there is no consciousness, the body is useless. The matter that we call a body comes to life because of consciousness. Both must co-exist.

Prakriti is the manifest and Purusha is the unmanifest. Ksetra is like Prakriti, the manifest that which we can see. Along with what we see, there is something behind its existence. It is Purusha or the unmanifest, the energy behind the matter which we do not normally see. Take an example of the solar system, all the planets move in perfect paths. They are not solely matter because there is something behind the existence of that matter. There is so much chaos, yet there is a beautiful order in that chaos. Order is present because of ksetrajna (consciousness). If it were solely matter (ksetra), there would not be any intelligence. We know that there is intelligence in that matter. It is that intelligence or consciousness which creates this existence. So the combination of ksetra and ksetrajna is necessary in life.

Modern science has proved that matter and energy are the same. However, the inner world scientists of Vedic tradition had proved the truth thousands of years ago – matter and energy co-exist to create existence. Science has proven that every cell in our system has embedded intelligence. Each cell is not made up of simply chemicals, each cell also has intelligence or energy. This combination creates the body-mind system.

In essence, the moment we understand that we are not just matter i.e. the gross body, we will start exploring deeper into the Science of energy and energy healing which can open up a whole new understanding about our body-mind and Existence. Namaste 😀