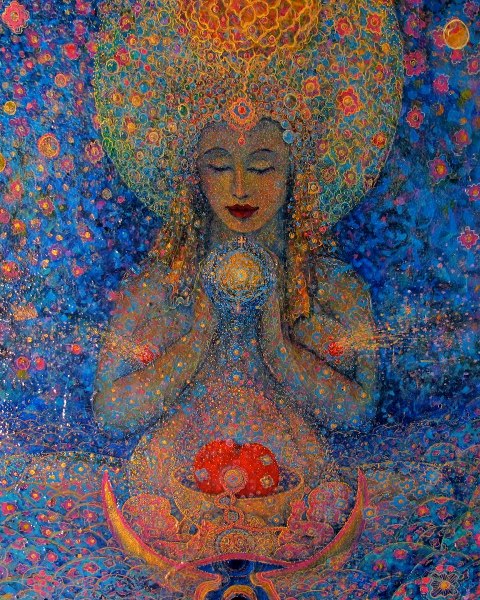 Have you ever noticed that in any spiritual gathering or yoga class, you will usually see more women participants than men participants? Are women more interested in spirituality than men? What is the connection between women and feminine consciousness?

The divine feminine consciousness is one of my favourite subjects because it fundamentally changed my inner space and gave me the cognition about my higher purpose in life.

The Vedic tradition describes the whole Cosmos as a cosmic feminine energy. Feminine energy is the space where the whole thing happens. This is the energy that constantly gives birth.  The source of divine or creation is the mother energy. That is why Vedic rishis describe the Cosmos as Devi loka (Cosmic Mother). Anything conscious is feminine, all other adjustments in existence for this consciousness to exist is masculine.  The center is the feminine consciousness; all the workers are masculine consciousness.  Enlightenment is about awakening the suppressed sacred feminine energy which lies dormant within us. Once awakened, it does so much to our consciousness because literally we give birth to ourselves.

I found the answers from a discourse spoken by my Guru, Paramahamsa Nithyananda on the female bodies and spirituality. He said “By the nature of the muscle memory, women are hardwired for three major qualities which can lead them to enlightenment quickly which are – receptivity, passivity and the ability to experience the feeling connection beyond logic. These 3 are the basic requirements for one to be enlightened, to be in complete fulfilment.”

An enlightened being is not male, female, transgender; he/she is beyond all these because something unique had happened in the body during enlightenment. During the enlightenment experience, the physiological mutation happens. In the masculine body, feminine consciousness gets awakened, the physiological mutation happens and he expresses extraordinary feminine grace and leadership. When a woman becomes enlightened, the awakening of the feminine consciousness makes her experience the complete fulfilment of both aspects of a mother and a beloved. She expresses an extraordinary creativity and masculine courage.

It is true that female bodies have more possibility for feminine energy because, by her nature, the feminine bio-memory is for receptivity, passivity and feeling connection beyond logic. These three are the part of the bio memory of the female body, the bio memory of women. Receptivity – the ability to receive which makes her non aggressive. It is not based on violence, it’s based on passivity.

When you become receptive and passive, just being with Mother Nature can give you enlightenment. A river can talk to you, a tree can fulfill your wish, a hill can initiate you; even ocean can fill you. In the life of another enlightened master, Ramana Maharishi, he became intensely feminine and it was Arunachala hill, a sacred hill in Tamil Nadu of India that initiated him, he just radiated that feminine consciousness. Almost all the enlightened masters, who experienced the highest consciousness, radiated extraordinary feminine qualities and grace.

Besides receptivity and passivity, for enlightenment to be transmitted, we need to get into a space of deep feeling connection beyond logic. Women, by their very nature, have the extraordinary capability to get connected beyond logic; that is why sannyas or bramacharya (renunciation) is a lot easier for the beings in a woman’s body, and not the masculine body. This is because the masculine bio-memory is in constant insecurity. We always hear men complain that they have to go out and face the world, bring home the bread, do business, protect the family, accumulate wealth, create infrastructure etc!  Men have forgotten one important truth – Enlightenment is eternal while infrastructure is ephemeral!

An interesting truth is men also carry the 3 qualities when they were little kids but their interest got conditioned by society which reduced them to the ordinary insecure life and confined to logic cognition. The good news is men can also radiate enlightenment, all they have to do is to go beyond the masculine-feminine identity.  There are two ways for men to start experiencing the feminine energy – 1) Start nurturing children because nurturing can only happen with mother energy. If they have their own child, they should spend time the child and help him/her grow in all dimensions. Alternatively, they can work with children in the personality development and expansion of their inner space. 2) They can help themselves to grow through spiritual practices like yoga, pranayama, meditation or mantra chanting. By doing so, they will awaken the feminine energy and evolve in the direction of creating the higher qualities of receptivity, passivity and a feeling connection beyond logic.

If we look at our modern society now, more and more women are expressing strong masculine energy. Why? One unfortunate thing that happened to human civilization is women are made to work and make a living like a man for which they are not created for. Many working mothers are so impatient when it comes to nurturing their children, some even conveniently shove their responsibility to commercial institutions or domestic helpers. No wonder more women are experiencing depression after certain age because they are not living an authentic life with their innate bio memory.  Women have forgotten that they have an important role in human consciousness which is to remind planet earth constantly of this intense passive life energy of creation and living enlightenment by their lives. Unless depression is removed from women, our society cannot evolve to the next level.

In 2009, I discovered the power of feminine consciousness and how my life took a complete shift. A major part of my healing process was to reduce the constant irritability and restlessness from my dominant masculine energy.  I realised that after this healing and awakening the suppressed feminine energy, the amount of patience and tolerance increased in me when I was with my son. I was able to be passive, receptive and creative in my expression as well. I realised that the space of feminine consciousness is where a child can truly connect with you because you see him/her as whole and there is only fulfilment of enjoying the child’s presence.

Through this knowing and experience, I see the potential of women as spiritual change agents for the elevation of consciousness. That was the reason why when I started my mission with Your Presence Heals, a part of my work is to heal women from their suffering and depression, share with  them the right knowledge and rekindle their feminine consciousness. For I know, deep from my Being, this is the only way the human consciousness can be raised to enlightened consciousness.  🙂