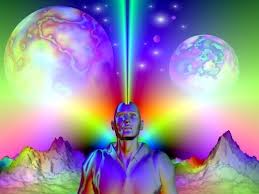 Many people around me have been shocked or disapproved of my new liquid diet since I returned from last December spiritual retreat, especially they saw me losing almost 10 kg since June 2012. Of course, the normal logical mind will not be able to fathom how one can live without consuming any solid food as a lifestyle, let alone thinking of new possibilities!

I was reminded of a story by my master, a living incarnation, Paramahamsa Nithyananda about the evolution from monkey to Homo Sapiens. It was about an expansion that happened when a few monkeys tried to become man and started to attempt walking straight on two legs.

And naturally, the small group of brave monkeys who tried to walk straight would have had thigh pain or knee pain as the body started to go through transformation, they would have taken a lot of risk and hard work! The monkey society would have called them crazy! There would have been a huge bunch of monkeys criticizing these few monkeys. But there would also have been a few intelligent monkeys saying “What he says may be practical, why not try?” Just like those monkeys cannot understand what it means to become a human being, in the same way modern men cannot understand the possibilities of living without solid food. Now a small group of brave human beings, who had experienced the space of new possibilities, have taken the first step in becoming a new man, a new species! This group is called Nithyananda Niraharis, a community of people living this solid food-free lifestyle. (Check out who they are and be inspired by their testimonials @ www.BFoodFree.org)

In order to fully understand the yogic science of Nirahara (no-food) Samyama, let me provide some basic truths.

First of all, from the sacred scripture – Yoga Sutra of Patanjali, Chapter 3 Sutra 110 Verse 3, Samyama is defined as the technology through which the extraordinary experiences and power, which are in our super consciousness, are expressed through our body to the world. You may be aware that our super consciousness is all knowing, all pervading but preparing our body-mind to radiate these great powers and expressing the powers, that yogic technology is Samyama. Samyama can be considered the ‘applied science” of pure yoga science. The applied science is a part of Hindu Vedic tradition, used to inspire people towards pure science. Pantajali, a Siddha sage explains that through the attainment of Samyama comes the light of knowledge.

Secondly, if you understand the Yogic psychology of evolution, all beings evolve from different bodies till they reach the ultimate space of liberation as divine beings. When we were in the body of plants and trees, we had the natural intelligence to create food by ourselves.  However, after taking many animal bodies and human bodies, we stopped this natural intelligence from functioning. We started to dump so much food in the system that caused our body’s bio memory to forget this original intelligence of creating food from prana (ether). With the divine grace, Paramahamsa Nithyananda gifted the world the Nirahara Samyama, a yogic technology which awakens our natural intelligence to create food from space and opens up a space of many new possibilities that will rock the false order of the world.

Here are the new possibilities I am really excited to see:

Life is all about the choices we make and being a Nirahari was a conscious choice I made because I believe the enormous possibilities in front of me and humanity – both imaginable and unimaginable by our human mind right now. Fundamentally, everyone has to decide for themselves whether they are ready to create a new space of possibilities in their life and ride on the waves of happenings.  Namaste 🙂