Science of Breathing (part i) – Breath is Life 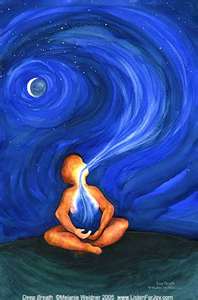 Breathing is synonymous with life itself – this is the first thing we do at birth and the last thing we do when we exit this body. Breathing is important to sustain life. Yet, this natural process is often compromised by our environmental conditions, past conditioning or traumatic experiences.

From the Human Developmental Patterns developed by Bonnie Bainbridge Cohen, it states that the breathing pattern is the template for all other movement patterns and states of consciousness, any distortion at this level of the human being affects all other physical, physiological and psychological processes. Many modern scientists are now discovering what the yogis have known for thousands of years – i.e. yoga movement and breathing techniques increase our lung capacity and efficiency.  After having worked on breathing for more than 10 years, I absolutely concur with this truth. For these reasons, the breathing pattern is the first thing I work on with my students because fundamentally breathing connects them to the most basic life process and therefore with themselves.

I’ve seen that many people come to yoga with already distorted breathing patterns. Here’s a simple list of questions that you can check if you are breathing properly.

If you have a “Yes” to any of the questions, you may be unconsciously stopping the natural breathing process which would affect your state of health. Some of the reasons we block this natural process can be due to ignorance, fear, social conditioning, stress, resisting change & reality, changing relationship with yourself, not trusting life and non acceptance of self.

Another important truth you need to know is that the breathing pattern and one’s life span are closely correlated. The Siddha’s science tells us that a man generally takes 15 breaths per minute which makes 21,600 breaths per day. At this rate, he can live for a period of at least 120 years. However, not all the life energy (prana) forced out during exhalation is regained during inhalation. The inhaled air contains only 20% oxygen while the exhaled air contains only 16% oxygen. This indicates that the oxygen retained by the body is only 4%. The yogic science states that the span of life will be reduced if one loses the pranic energy or life force. In Boganathar’s poem who is a Siddha, he explains this truth that excessive breathing reduces the normal lifespan and eventually leads to death. Another Yogi, SAA Ramaiah referred this as the Law of Inverse Proportions, i.e. the life span is inversely related to the rate of breathing.  If, due to poor living habits and indulgences of activities caused the average breathing rate to be 30 per minute, the life span of human being will be only 60 years. However, if the rate is slowed to 5 breaths per minute through yogic practices and a simple lifestyle; the life span will be 360 years. This law is also confirmed by the study of modern zoology with animals like turtles who breathe 4 to 5 breaths per minute vs. other animals like mice, dogs and bears. So, if longevity is what you want in your life, start working on slowing down your breathing rate through yogic practices.

The science of breathing is such a vast topic, it will take me at least 3 more articles to share the important implications to our life and consciousness. I will delve on the Physiology of Respiration, Breathing at the Pranic Body and Breath Watching can lead you to the Ultimate. Stay tuned. 🙂